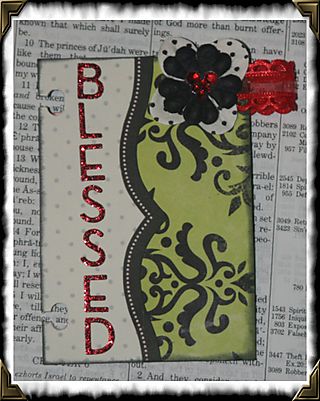 We went to Santa Barbara today...it was a beautiful day!!  To top my day off I got to play a bit tonight.  I started this ATC card earlier in the week but didn't have time to finish it until tonight.  I love doing these Scripture Challenges that Patter is whipping up!! 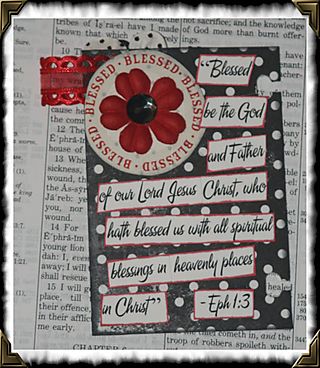 Here's the flip side of it.  I really love how full my ATC holder is getting, not quite as full as Patter's ATC Holder LOL, but it's getting there....once it's a little bit more filled out I'll share it with you. 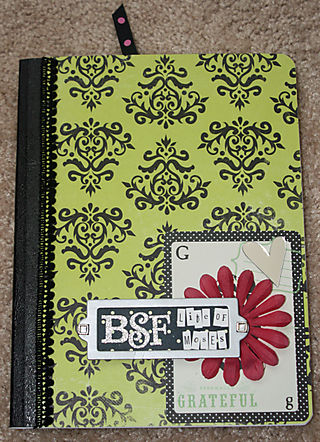 Every year I alter a new composition notebook for my yearly study at Bible Study Fellowship...here's mine for this year.  We'll be studying the Life of Moses this year & I'll keep a lot of my notes in here.

My last CKU Provo post....better late then never LOL.  Sorry, to take so long but since I've been home from CKU I've been super busy with work & life stuff. 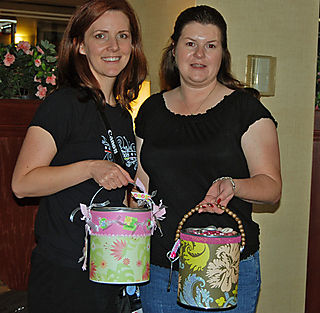 You all have seen my paint can & what's inside it here....but here is Ronda F & I after we swapped cans at the Paint Can swap.

This swap was kinda like an arranged marriage...Faye (the swap hostess) would hold up two cans, the two creators of the cans would come forward & you'd get each other's can.  Afterwards there were hugs and photos.

Thanks Deanna for taking our pix! 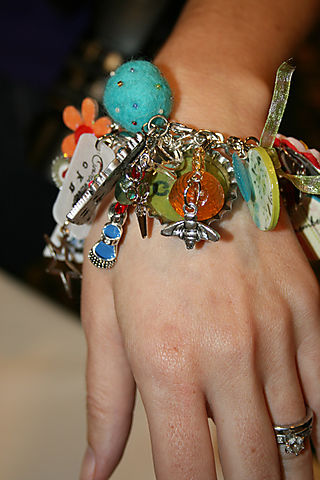 And here's my loaded charm bracelet from the charm swap.  I should take more pix of it & post it, but if I waited to do that I'd never get it posted LOL.  Thanks Jessica for taking this pix of it & letting me have a copy.

I think we ended up with 25 charms in all....quite a lot for my wrist LOL!  But it was a really fun swap to participate in.

I have a feeling this is going to be a long post LOL. 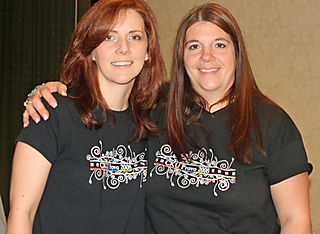 I've always wanted to go to CKU Provo, in fact that was the only CKU I was ever planning on going to, however I was never able to make it to the previous ones.  Last year there was one in Anaheim, CA & since it's so close to us I decided to go...which I'm very thankful for since I met so many great friends.  It was great to see so many of them in Provo this year and to also get to meet new friends.  I'm SO thankful for the CKU Provo Yahoo Group (which I helped moderate)....it's great to "meet" so many ladies online before meeting face to face.  If you ever plan on going to a CKU make sure you join the Yahoo Group!!!  -It's worth all the email, I promise!!  -Plus we always come up with cute t-shirts! 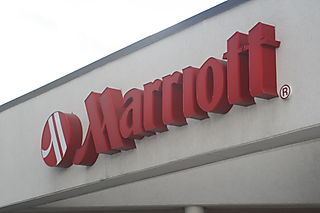 Let's start with the hotel.  I do have to say, the Provo Marriott was the worst Marriott I have ever stayed at.  They were totally unprepared for us (& a UPS convention) to be there (at the same time).  Dinner at their restaurant took FOREVER & we had to help the server figure out how to take so many orders at once & split them up...it was pretty funny.  Also, when we checked in it took about an hour to get our luggage from the sidewalk to our rooms since they only had 3 bell carts...CRAZY!!  (I won't even tell you about how long it took to get our luggage back down on Saturday.) I hope CK doesn't plan on having another convention there without making sure they beef up their staff & bell carts.

CK had early registration this year....and they held it open late for the So Cal to Provo bus...super nice of them!  So it was nice to be able to pick up our stuff, sort through it, and write our names on everything before everything got started. 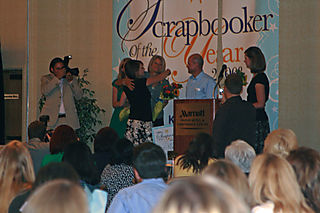 On to the Scrapbooker of the Year (SOY) banquet.  First off, why CK called it a banquet we'll never know.  -Guess they don't know the definition of a banquet LOL.  They only served brownies, which I'm sure were delicious even though I didn't eat any.

After the winner (Mandy Douglass) was announced I snuck out so I could meet up with friends for dinner and met up with Diana to pick up my charms from the CKU Provo Yahoo Group charm swap.  I'll post pix of my charms later...I still have to take pix of them. 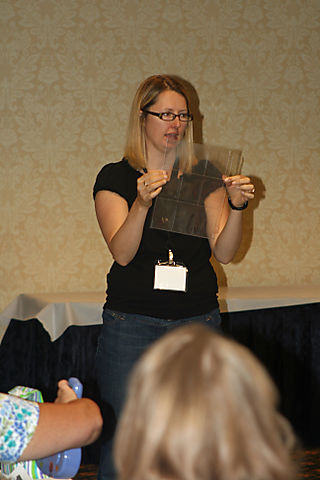 This year Inspiration Stations replaced the Make & Take craziness.  -A totally great change IMO.  This year we were divided into "homerooms" and the teachers rotated to us, so we go to sit in the same spot all day.  -No lugging stuff!!  -No fighting for a seat!!

CKU also provided lunches for us this year.....CKUs at other locations have said that they had really great lunches.  Ours were not so great, but they were better than nothing (or the pizza I kept having to eat in Anaheim last year).  I was thankful for the bottled water though...my fav!! 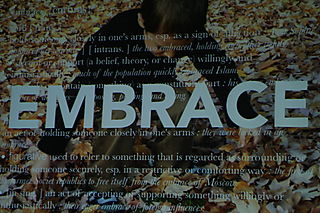 The Kick Off Bash was Thursday night and we got lots of great goodies when we came in.  Ali was the keynote speaker...I always love to hear her talk.  The Dorms also competed and it was fun to see all the competing dorm's costumes.  I was in the non-dorm (which doesn't compete) and we did a princess theme this year.  I had a lot of friends in the CKU-ville dorm (a spoof on Dr Seuss)...loved Val's costume....she was a Horton type character.

Here's some other dorm pix (you can click on them to see them bigger: 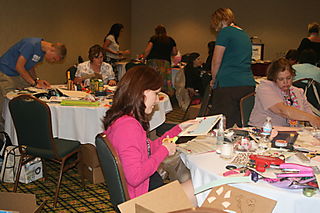 I chose to take my album on Friday.  I was in Margie Romney-Aslett's "Remember" album track.  It was really great to have so many friends in there and see how everyone had their own take on Margie's album.  I still have to finish mine, but once I do I'll post it....it could be awhile though.  Oh, and do you see what I see in that pix????  A man in our class!  Yep, a few men DO attend CKU. 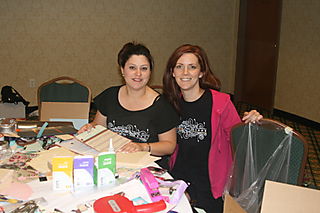 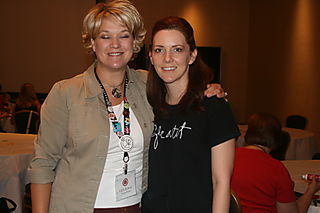 Saturday I did the classes.  Very fun day.  Started off with Layle Koncar & Scenic Route.  We did a really great LO.  Layle's classes are always something I look forward to. And I was blessed to win a give-away in her class. Got some inky fingers in Tim's class....but TOTALLY worth it!  We jazzed up an Ikea mirror with Grungeboard and Fragments...turned out really neat....I'll show you when it's done. 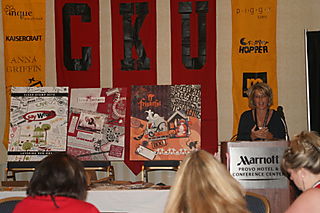 The gals at Little Yellow Bicycle were very generous and provided me with part of the Vita Bella collection to make my own acrylic album since we don't celebrate Halloween and that's the album they were slated to teach.  And of course once I finish mine I'll show you it.

Brandon Brazel from Piggy Tales taught a slide book album...unfortunately I missed this class since I needed a nap desperately so I just got my class materials and headed to my room for some shut eye.  Eventually I'll work on it and....you guessed it....I'll show you what I come up with. 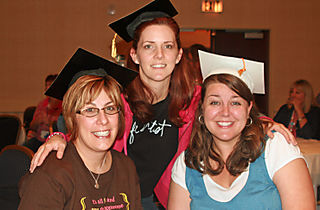 Commencement was on Saturday.  We had fun watching the closing slide show....it's wasn't quite the same with out Candice's touch....but it was neat to see so many good memories in it.

While I don't know if there are any more CKU's in my future, I do know that I am grateful for the ones that I have been able to go to and I hope to always hold on to the friendships I've made because of them. 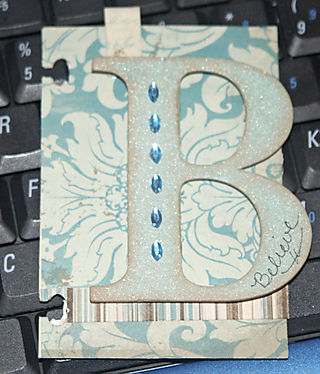 I love the bling too....it was a great find at one of the SB stores we went to on the bus last week. 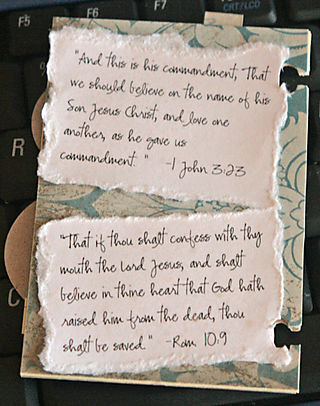 Sharing the creative side of my life here at creativitE.

The Art of Bible Journaling